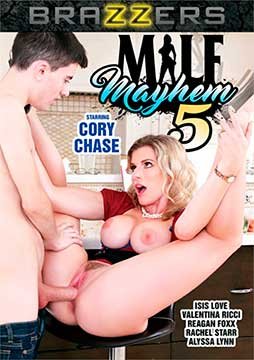 Описание: Alex can't take it anymore. Anytime he tries to get somewhere with his girlfriend, she shuts him down. Fortunately, Alyssa overhears their plight and would hate for her daughter to lose such a good guy like Alex. She decides to take matters into her hands, along with Alex's thick cock. If her daughter isn't willing to put out, Alyssa is more than happy to suck and fuck until he drains himself all over her face.

Everyone knows that Lucas has been sweating his best friend's hot mom Isis for way too long. Since it's Lucas's birthday, his bud wants to do something special - that's why he surprises him with a cake carried by his mom, and tells him that just for today, he's free to fuck her. What a pal!

Alex has returned home from college and is surprised to find his dad’s new girlfriend sprawled out near the pool. With Rachel’s big tits glistening in the sun, Alex is instantly sprung! Rachel, however, just wants to get to know her new stepson. Will his perverted behavior cloud her judgement, or will this wholesome, busty gal realize that this young graduate just wants to show her what he’s learned?

Laundry day is the worst. Luckily, Jordi's stepmom's house isn't too far away from his campus dorm. She gladly lets him in, eager to help him out with his dirty clothes. She quickly releases this is a good opportunity to do a mixed load... starting with taking off her top and revealing her amazing tits. Jordi can't help but return the favor, and plunge his massive rod into his stepmom's tight pussy. Seems like a favorable arrangement!